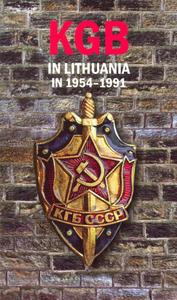 From the Genocide and Resistance Research Centre of Lithuania.
During the Soviet occupation every third Lithuanian became a victim of mass terror and the KGB was the primary executor of this terror. As a result, the KGB and its history of repressions, persecutions and executions became a part of Lithuanian history.

This book will help explain what the KGB was, who were their agents, how were they trained, the methods and tactics they used, the physiological and physical terror they used and the life style of the typical KGB agent.