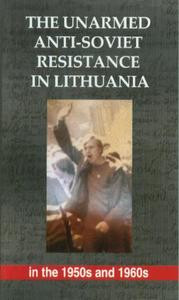 UNARMED ANTI-SOVIET RESISTANCE LITHUANIA in the 1950's and 1960's

How Lithuania used the changing times to help in their fight for freedom
From the Genocide and Resistance Research Centre of Lithuania.
Conditions for the unarmed anti-Soviet resistance in Lithuania appeared in the early 1950's. With the weakening of the almost ten year long partisan fight for freedom came the realization that it was necessary to look for new forms of resistance. The 1950's, with the death of Stalin, also brought some policy changes from Moscow. The 1960's saw international relations with the Soviet Union worsen. As a result international pressure was starting to build against Russia¿s occupation of countries specifically the Baltic States.

This book walks you through the events of this time period. It sheds light on how the dissident and human rights movement, publications, the Catholic Church, student groups, the Lithuanian Helsinki Group and the Moral Ultimatum to the Government of the Soviet Union all effected the resistance movement.

The photographs include some of the key events of this period and the key people and groups. This is a very interesting book on how Lithuania used the changing times and how Lithuanians helped to change the times to help in their fight for freedom and how Moscow reacted to these movements.